Lions leave no doubt in win over Cudahy 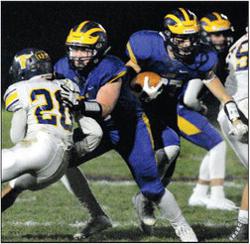 NEW BERLIN — New Berlin Eisenhower’s football team has been one of the best in Division 3 all year, and they opened the playoffs with a bang.

The top-seeded Lions left no doubt in their WIAA first-round game against Cudahy on Friday night, as Ike easily defeated the Packers, 49-0.

“I think we really wanted to come out and make sure we established the line of scrimmage on both sides,” Ike coach Matt Kern said. “We know that’s going to be something that’s crucial to our success in the playoffs here. I was happy with the way we did that. I thought our defensive line had a nice night and we were able to continue to force turnovers. I would call it kind of a businessman-like effort tonight.”

Both teams traded three-and- outs before three game-changing plays happened consecutively. The Packers had the first of those when junior defensive lineman Kyler Palmatier blocked a punt to set Cudahy up deep in Lions territory.

Ike had the next two big plays, one of them accounting for the first score. On the first play of the ensuing drive, Lions’ senior defensive back Jake Schara intercepted a pass in the end zone and returned it to the Ike 34-yard line. The next play, Himmelspach found a hole and darted up the middle for a 66-yard touchdown to give the Lions the early lead.

After the defense forced another three and out, the Ike offense went to work. Himmelspach opened the possession with a 25-yard run that set the Lions up in the red zone. Sophomore quarterback Gabe Seifert later scored on a keeper from two yards out to double the advantage at 14-0.

“It was the big guys up front early,” Himmelspach said. “They’re giving me holes. Cudahy played it pretty well sometimes, but when the holes were there, I was just able to cut them up and outrun them to the end zone.”

“Jack’s a unique talent and he’s obviously a big weapon; big piece of our offense,” said Kern of Himmelspach. “I know as we get going here deeper into the playoffs that he’ll continue to be a big part of the plan.”

The Packers hit their first big play on the next drive when freshman quarterback Bryce Barbian found senior wide receiver Austin Eichstaedt down the left sideline for a 36-yard pass. However, Ike’s secondary ended the drive again when junior Max Lewis ran down an interception in the end zone.

“I know our kids take the preparation part of everything really seriously during the week, so I know those guys have a pretty good idea of what we’re going to get from the opponent,” said Kern regarding his secondary. “That gives them an extra step in coverage and they’re also really looking to get hands on balls.”

Seifert hit his first big pass on the next play when he found senior wide receiver Samuel Tausz on the sideline for a 66-yard gain. Seifert later scored on another keeper.

“The two touchdown runs were the big guys up front,” Seifert said. “They create the holes and I’ve got the easy job of running through them. With the passes, my wide receivers are so talented. (Junior wide receiver) Ben Buechel’s got good hops. Just toss it up to the guy. Sam Tausz made a great play on that short pass and took it 50 yards.”

Ike ran a few plays to get into Cudahy territory on the next drive and set up Eli Hoelke for his big play on offense. Hoelke ran a sweep left and scampered 38 yards to bring the score to 28-0.

Himmelspach struck again with just under two minutes to play in the first half. After a Hoelke interception, he ran 35 yards down the right side to give the Lions a five-touchdown lead at the break.

The senior running back kept his rhythm going to begin the second half. Himmelspach initially ran for a 60-yard score that was called back on holding, but he later scored on a 27-yard run right. A 47-yard strike from Seifert to Buechel set him up for the scoring run.

Ike got its final touchdown following an interception that was initially returned for a touchdown but was called back on holding. Junior backup quarterback Gabe Olson found senior wide receiver Jason Cooke for a 22-yard gain before junior running back Jack Osielski punched in from 2 yards out to produce the final score.

“I think the biggest thing is for our guys to just make sure that they’re competing every single day,” said Kern regarding his team’s chances in the playoffs. “I think not necessarily getting upset or getting down if something bad happens. If a team scores or makes big plays, it’s just playing the next play.”

NOTE:  This article has been altered to correct the names on some of the plays.